The story of an eerie pizza house with toys coming alive and roaming the corridors of the building at night has gained quite a following. We’ve already seen many parts of FNAF released, each adding something new to the familiar setting. This time, however, you’ll be challenged to beat all 50 of animatronics from the previous versions. Prepare for a super tough horror experience as you watch the haunted restaurant through your security cameras from a small room you can’t escape until morning! Are you ready to test your guts? Then wait until midnight and begin! 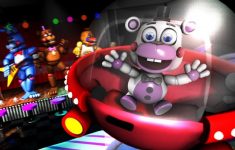 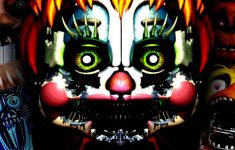 All FNAF characters to choose from!

Featuring every one of previously available puppets from FNAF, Ultimate Custom Night allows you to create your own mashup of characters choosing any from the list and also configuring their difficulty level. Based on values from 0 to 20, you can select how intelligent and dangerous they will be. Don’t expect the game to be easy! Even on the lowest difficulty level, you will find it hard enough to handle the diversity of appliances developers have added into the mix. Specific devices can be used to exploit the weak sides of your enemies. For example, some animatronics are afraid of cold, so you can modify the temperature in the building to keep them away if you spot them any close to your room. There are some who aren’t indifferent to music. As long as you keep the music box playing, they won’t bother you. But make sure to pick the right tune!

Just like in the earlier games, you will see everything going on in the restaurant through the cameras. This way, you’ll be able to track the toys’ movement and find out if there is any danger looming ahead. You can also open and close the doors and additionally control air vents that can be used by the monsters to crawl into your office. However, you should keep an eye on the power level. As usual, the amount of electricity is limited and you don’t want to run out of it before dawn. If you use all the power too early, the lights will go off and you won’t see a thing. After that, you’ll have to use the power generator that makes too much noise and can attract the enemies. To avoid mistakes like that, it’s recommendable to minimize your manipulations with the appliances until it’s absolutely necessary. Getting the hang of the new equipment can be tricky, especially since you need to cope with multiple devices at once. You might want to read about them beforehand to plunge into your first trial prepared.

Set the difficulty and get creeped out!

The game sets up a total of 16 themed challenges. You can configure the level of complexity to your own taste. The most hardcore of them, 50/20, is considered to be practically unbeatable, but that doesn’t mean you can’t try! The timer in the corner of the screen will keep track of your survival progress counting the time you have lasted in the session down to the fractions of seconds. Completing the trials will bring you a particular amount of in-game money called Faz-Coins. Go to the virtual store and buy some new weapons, devices and other stuff that can be useful to help you survive. There are also various office skins to purchase giving you a more varied gaming experience.

Ultimate Custom Night is a must-play for every fan of Five Nights at Freddy’s! Iconic graphics that make the game even spookier, great voicing and amazing cutscenes giving us a glimpse into the story of the pizza house will surely captivate you! Dive into the ultimate horror experience of FNAF and improve your survival skills increasing the difficulty of your scenarios and holding out for another hour every time!